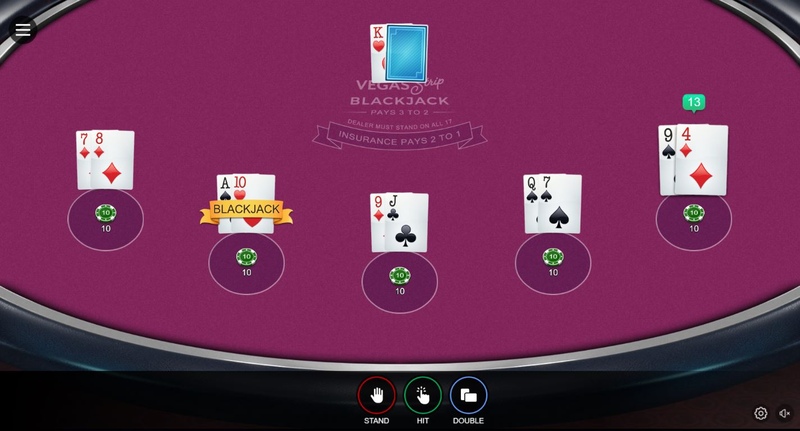 There are many many different variations of blackjack, each with slightly different rules to give the game a new dynamic, but the one that most people are referring to when they suggest a game of blackjack is Vegas Strip Blackjack.

This game uses rules which have gone on to become the ‘standard’ if such a thing exists in blackjack, so all other versions of the game are seen as variations on this one.

It is sometimes called American blackjack too, and the only minute difference between the American game and the UK game is that in this one, the dealer might peek for blackjack after the deal.

Other than that, the rules should be the ‘standard’.

Table minimums aren’t set as standard though, so even though the game might be the same the price to play a hand might not be, depending on where you play. Generally, playing online will be cheaper than playing in a real casino in almost every situation.

We are looking at the Switch Studios (Microgaming) version of the game here, so it’s an online game, and it allows players to bet on up to five hands per game making it a multi-hand game.

This doesn’t change the game at all, other than the fact that you can play several hands per round rather than just one if you choose.

Assuming you know the ultimate objective in blackjack and the way in which the game works from a logistical perspective, the rules are easy enough to understand, and being the most often played version you won’t be surprised by any of what you see below:

One other thing to be aware of is that, with this being an online game it is run using an RNG, or random number generator, which automatically and instantly shuffles the cards after every game. This means that card counting will not work.

Insurance will be offered if the dealer’s up card is a Ace, but not if it is a 10 value card, but this is always a bad idea so the advice is not to buy insurance when playing blackjack.

This is the amount that is built into the rules in the house’s favour, so you can see it as their advantage over you.

All casino games have a house edge, it’s how the casino makes their money, but some games are more generous than others, and players making poor choices within those games can also increase the edge.

For this reason it is important to play optimally, and that means making the right decisions based on probability for every stage of every single hand.

Online games will all show you their RTP, which is the theoretical return to player over the long run, and this is worked out assuming optimal play and shown as a percentage.

The house edge is just the opposite of the RTP, so if you take the RTP figure away from 100, whatever is left is the house edge built into that game.

Of course, the casino will make more than this because most players don’t play optimally on every hand.

You can find charts online that tell you how to play each hand correctly if you search for them, but make sure you have the right chart for the version of the game you are playing.

We have created one for Vegas Strip Blackjack below: 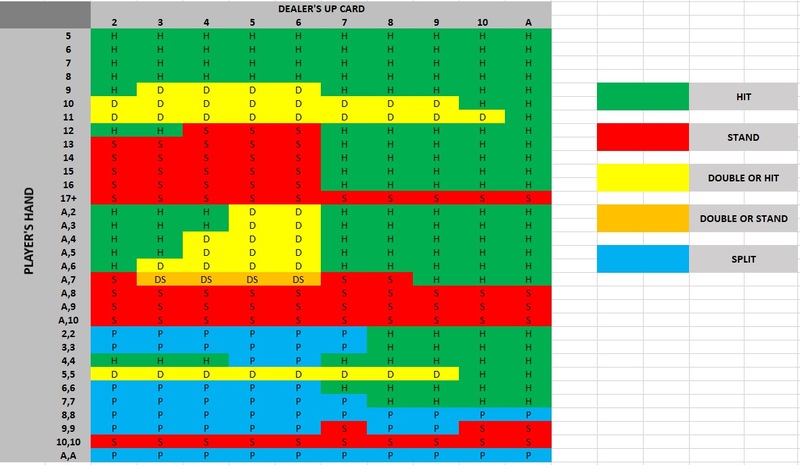 When using this chart you simply find your own hand on the left, find the dealer’s up card at the top, and track to where they both meet to find your instruction. You can do the same thing after a split when you have two new hands, and after you have hit and have a new hand total.

With regards to doubling, follow the instruction if doubling is an option but if it is not follow the second instruction, so either hit or stand.

With all of that said, provided you are playing each hand optimally the house edge will be 0.45%, giving a return to player or RTP of 99.65%.